The previous days have been some of the worst in a long time… Last Friday started like any other Friday, the dogs were let out in the garden, but when they came back in, Yolene was walking on only 3 legs. She wouldn’t use one of her hind legs, and the vet confirmed our misgivings in the afternoon – Yolene had torn the ligament in her knee. The message was clear – Yolene needed to go through surgery or be put down. Off course we had discussed the alternatives before we went to the vet and we agreed that she shouldn’t go through surgery at the age of 8½ years – but standing there with Yolene at the vet, I was not at all ready to make the decision. So we went back home with our dog and a big package of morphine pills, and spend the weekend considering the options. But after long and thorough considerations I had to admit to myself on Sunday evening, that I couldn’t put her through an operation, that afterwards meant keeping her absolutely calm in the first months. No sudden movements, which meant keeping her in a cage, when we weren’t home, and also when we took the other dogs for a walk morning and evening. It was absolutely heartbreaking to think of her sitting at home in a cage and it was not fair at all to a dog, that despite her 8½ years of age was still very active and galloped away on all her walks. This was undoubtedly the worst decision I have yet had to make. I had hoped and believed that Yolene would reach the 10 year mark, just like her mother, because in no way did she seem like an old dog – she was still playful and full of joy on the daily walks and loved to paddle in the stream in the backend of our ground. And because of that it would be unfair to put an active dog as Yolene in a cage for the next several months. We used to call her our ”Formula 1 Dogue de Bordeaux”. But Sunday evening we made the last trip to the vet and said goodbye to Yolene. She is now burried in the garden, in the shadow of the cherry tree. I miss her terribly – rest in peace, sweetheart. 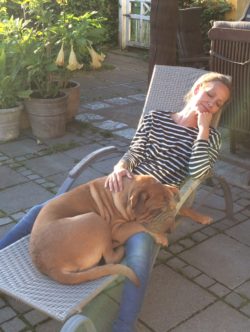 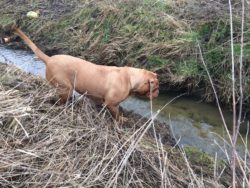 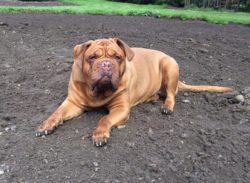