Since our last update, Soletrader Penny Lane has been shown three times in junior class – and has achieved three CACs and one BOB! We are very happy with the way she has developed, she looks absolutely gorgeous and we love her type. Her biggest challenge is the fact, that she doesn’t like showing that much… :-/ Hopefully the anxiety has to do with her age and her second heat and we hope in time (and with a lot of socialization) it will better. 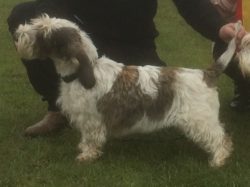 Also – we have a new addition to the kennel. 🙂 We lost Yolene – our last Dogue de Bordeaux – late February. Ironically enough, the day before Yolene’s injury, we had decided to get in touch with Kristine Schoubye from Kennel North-End Bordeauxs, as she had an upcoming litter, that we very much wanted to have a female puppy from. The litter was born a week after Yolene’s passing – two females and a male. We can not THANK Kristine enough for letting us have one of the females – and we now proudly present North-End Bordeauxs Akane “Vesper” as part of the family. :o) Vesper is already terrorizing the other dogs(!), but they are very tolerant towards her and our oldest PBGV Carla has immediately taken on the job as playmate. :o) 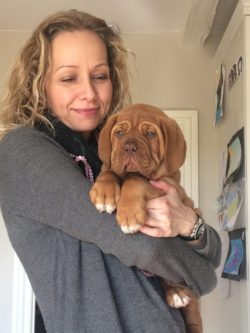 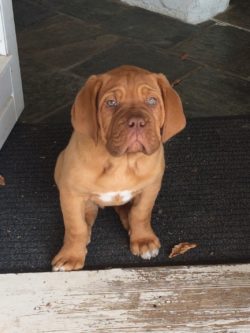 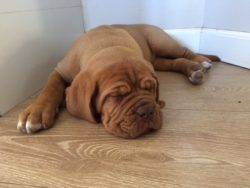 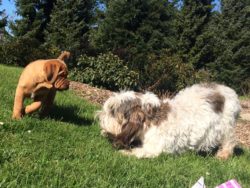